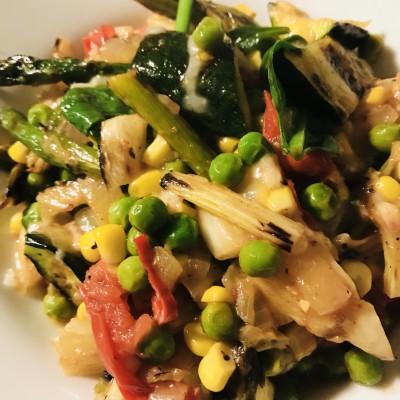 This dish is so tasty, Pete says he always makes enough for leftovers but sadly, theres never any left!

Check out the delicious BBQ vegetable succotash Pete has been cooking up this  this summer!

Pete’s secret to make this popular dish even more delicious is the light char he puts on the veggies with the BBQ before putting the dish together.

He loves throwing something other than meat on the BBQ and sees this as a wonderful way to trick yourself into eating a big helping of veggies.

This dish is so tasty, Pete says he always makes enough for leftovers but sadly, there’s never any left!.

Often described as “Summer in a bowl”, succotash is an American dish that usually consists of sweetcorn with some type of beans or peas, tomatoes and other veggies, flavoured with basil, jalapeno, salt, pepper and lemon juice.

We highly recommend you make it from those succulent heirloom tomatoes and other seasonal veg that you can find at farmer’s markets at the moment.

It perfectly accompanies grilled chicken, fish or beef. Or you can simply pop a poached egg or some BBQ tofu on top.

Peter Slipper is an experienced and highly regarded Acupuncturist and Chinese Herbal Medicine practitioner. He has been practicing at Fertile Ground Health Group for over 10 years where he specialises in fertility, IVF support, pregnancy and hormonal conditions. Pete also enjoys treating immune, digestive and metabolic issues.